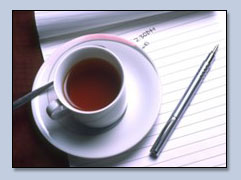 Researchers have discovered that regular tea-drinking can prime cells to secret disease-fighting chemicals. Tea contains alkylamine antigens, which are also present in some bacteria, tumour cells, parasites and fungi. Exposing the body to these antigens enables a defence response. Gamma-delta T cells, which are the first line of defence against infection, will multiply by up to 10 times to fight off infection.

Within two weeks of the study, participants who drank tea the increased immune response, while coffee drinkers showed no increase.