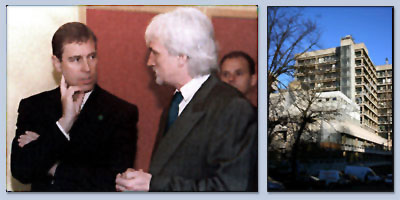 Aromatica’s class of 2000 will instantly recognize Keith Hunt in this photograph with Britain’s Prince Andrew! That’s because Keith came to Canada in 2000 at Aromatica’s invitation to teach our students his unique ‘Massage for Cancer Patients in the Hospital Setting’ workshop. In January this year, Sara Rankin and Jeff Cottam were ecstatic to hear that their friend received a prestigious award in the UK, being recognized as an ‘Inspirational Figure’ by the country’s National Health Service (NHS). Mr. Hunt received his National Champions Award for his work at the Royal Free Hospital in Hampstead, London where he is the Complementary Therapies Co-ordinator, being nominated by the hospital for his ‘inspirational’ contribution. He is shown giving Prince Andrew a tour of the hospital, one of Europe’s premier teaching hospitals.

Twenty years ago Keith Hunt created a complementary therapy service at the Royal Free which today gives over 17,000 massage treatments each year to patients in the hospital. He sees patients in all wards – palliative care, intensive care, undergoing radiotherapy and chemotherapy treatment, children undergoing painful and difficult treatment such as a stoma and most recently mothers during and after childbirth. He is at the vanguard of complementary therapies in the NHS in England and his model has been replicated in hospitals nationwide. Keith likes to work with patients that need his services the most. “For 15-20 minutes they just have to relax and enjoy it,” says Keith “It’s a treat, not a treatment. It’s not going to take their cancer away, but it can make people a bit less tense. It works wonders in calming patients before they go into the operating theatre, even in the intensive care unit.”

When Keith was in Canada in 2000 he toured the South West Regional Cancer Centre at Windsor’s Metropolitan Hospital with Aromatica’s Jeffrey Cottam at the invitation of the Chief Oncologist. Mr. Hunt told doctors and nursing staff about the work he did in London’s Royal Free Hospital. Hunt and Cottam were then invited to demonstrate and provide massage for 23 cancer patients receiving chemotherapy that day. They did so, which was a ‘first’ for cancer patients in a Canadian hospital! The form of gentle massage these patients received on their hands, legs and feet was so light it could not possibly stimulate the lymphatic system yet still provided therapeutic benefit to the body. The Oncologist’s fear was that cancer could metastasize through the lymph but this is not the case with this specialized form of massage, explained Mr. Hunt. He told of the work he sometimes does in the Intensive Care Unit at his London hospital advising that this type of massage can be quantified because of the monitors attached to the body.

“It is amazing” he enthused “to see the monitors in ICU all showing rates of respiration, blood and body temperature normalizing as stress is released – even in times of such stress!” He admitted the doctors joke with him sometimes, saying “Go on – get in there and do your Voodoo!” Then added seriously “but the doctors wouldn’t request my services in ICU if they didn’t think it would help”. Massage is not incorporated into the health care of Canadians during hospital stays in this country and Mr. Hunt asked “Why not? Its cost effective. It works. It puts a smile back on the face of a worried patient and less pain medication is required.” He did not obtain any satisfactory answers however and left the hospital puzzled.

England has a long history of acceptance of complementary therapies in their health care system and it is widely known that members of Britain’s Royal Family approve of alternative medicine – which always helps. On a Canadian visit in 2001, Prince Charles implored the Canadian government to incorporate complementary medicine into the Canadian health care system in a speech to the Manitoba legislature but it fell on deaf ears. So, is there the political will for this type of change in Canada? It would only be a small step to take (to include massage for hospital stays) that’s true but it would signal a fundamental shift in policy to include complementary medicine in the Canadian health care system. Nurses 40 years ago in Canada used to give back rubs to all patients who wanted one before going to sleep. That was removed from their duties long ago but a massage professional could restore this much needed practice and expand on the service. The problem (we believe) lies with the powerful pharmaceutical lobby, entrenched so comfortably on Parliament Hill, who influence all decision-making processes there.