Myomassology Massage Tailored to your Needs 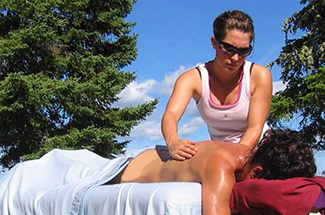 Our Myomassology Massage treatments are now offered at two Ontario locations; Hockley Valley near Orangeville and Cape Chin in the Bruce Peninsula.

If you’ve never tried myomassology massage, you won’t believe the difference. In addition to conventional Swedish massage techniques, you’ll enjoy a host of other methods that promote a deep sense of well being, pain relief and chakra balancing. Your myomassologist will design a treatment protocol for you based on your personal needs, from finger-tip soft relaxational massage to deep tissue therapeutic massage, concentrating on tired aching muscles.

Myomassology means Myo (muscle) mass (massage) ology (the practice of). Myomassology came into being in 1972 in Hot Springs, Arkansas after a group of Massage Therapists and Educators broke ranks from their association to form the International Myomassethics Federation (IMF). At that time, Swedish Massage was the only form of bodywork which was recognized by their organization in the United States and schools were restricted to teaching only one method, which did not see the merit of an holistic approach to health.

Schools of Myomassology were therefore formed, which incorporated this holistic approach to health which works to balance mind, body and spirit. These schools included the ancient healing arts such as Aromatherapy, Reflexology, Tuina and Acupressure in their curriculum, as well as basic Swedish Massage and the newest leading-edge techniques such as CranioSacral Therapy.

In a typical Myomassology treatment, various therapeutic methods may be utilized and treatment is always designed to meet individual client needs. This recognizes the uniqueness of each individual and is the “hallmark” of a Myomassologists’ training.