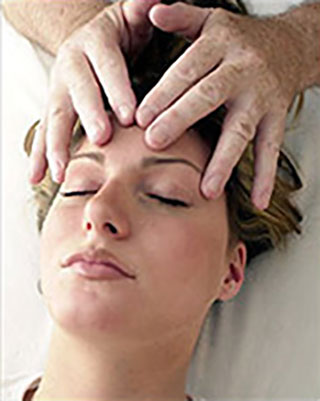 Craniosacral Therapy assesses and realigns the dural membrane system housing the central and peripheral nervous systems, releases tension in areas of potential transverse restriction of fascia in the body, mobilizes cranial bones, the spine and sacrum utilizing techniques known as the 10 Step Protocol. The 10 Step Protocol was developed through research carried out at Michigan State University in 1972 by the celebrated Osteopath, Dr. Upledger.

This complex system of cranial joints allows for the expansion of the membrane system which houses the brain during the production of cerebral spinal fluid (CSF). Treatment sessions mobilize all these cranial bones to reduce possible restrictions which increase fluid pressure against the brain by those areas affected by it. In addition, by mobilizing these bones and joints we improve the balance, symmetry and amplitude of this fluid (CSF) which is produced naturally every 8 to 12 seconds inside the cranial vault.

Fluid is also siphoned off through the straight venous sinus of the brain – triggered by pressure valves inside the brain designed to monitor fluid production. CSF has its own pulse which can be felt and monitored by palpating these cranial bones. The trained CranioSacral Therapist is able to suspend fluid production by inducing a Still Point. The body achieves Still Points on it’s own several times a day when the production of fluid becomes disorganized and shuts down for a few seconds or minutes before re-activating again.

When fluid production commences again it is always much stronger and vital than before, similar to what happens when you re-boot your computer – it may have been slow and sluggish with too many open files but is snappy and more responsive after you shut it down and start up again after a brief pause. The production of CSF is similar to the way our computers respond in this way.

A typical treatment session induces sleep within minutes and produces a deep sense of relaxation felt to the body’s core, long after the session is finished. This extremely gentle therapy is particularly effective in the treatment of stress, back pain, neck and shoulder strain, TMJ Syndrome, migraine headaches and many other conditions too numerous to mention here.

Our CranioSacral Therapy is now offered at two Ontario locations; Hockley Valley near Orangeville and Cape Chin in the Bruce Peninsula.